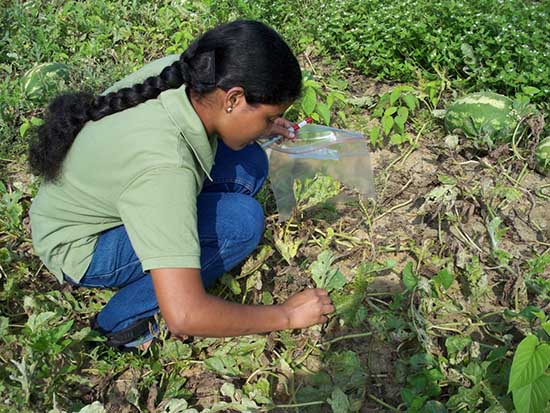 WERA-060 (2007-2012): This multidisciplinary project continues to develop resources, tools, and methods  that significantly reduce the threat of pesticide resistance, thus helping to sustain the usefulness of important pest  management tools and strategies, reduce losses from pest damage, and protect public and environmental health.

Pesticides are important tools used in managing pest populations; however, some individual pest organisms are naturally resistant to  pesticides. These resistant individuals survive and reproduce, passing on genetic resistance to generation after generation until most of the  population is resistant and certain pesticides are no longer effective. In recent years, use of conventionally applied herbicides, fungicides,  and insecticides has increased significantly and pesticide resistance has multiplied rapidly. In addition, some insect pests have developed  resistance to insecticidal proteins that are expressed in genetically modified plants. When resistance develops and commonly-used  pesticides fail to control pest populations, damage to crops, property, and landscapes intensifies and costs skyrocket. For example, cotton  growers in the southeastern U.S. face serious crop losses due to weeds that are resistant to the commonly-used pesticide, RoundUp®.  Soybeans, rice, and other crops are expected to face similar problems soon. Pesticide resistance often leads to overuse or misuse of pesticides, risking harm to the environment and public health and making the crops less desirable to certain markets and consumers.  Quickly and successfully addressing pesticide resistance requires the work of scientists from many disciplines and up-to-date information. Managing pesticide resistance also relies on persistent monitoring and consistent, effective strategies in the field. Better management of  pesticide resistance will lead to improved protection from pests, a more stable supply of quality crops for consumers, better profits for  growers, and healthier humans, animals, and environments.

Over the past five years, WERA-060 researchers and extension specialists have worked with industry representatives and government  regulators to develop resources, tools, and methods for managing pesticide resistance. Researchers have detected resistance in a wide  variety of pests—including insect pests, plant pathogens, and weeds in cotton, peanut, corn, squash, and melon—and have described how  resistance develops in many situations. Scientists have also developed guidelines for preventing pesticide overuse and misuse and have  evaluated how well new pesticides control pests and how quickly, if ever, pests develop resistance. Other studies have determined how new  pesticides impact non-target species and the economy and how well they are accepted by users and communities. In addition, researchers  have investigated how to block the genes and specific mutations that cause pesticide resistance. To share research findings, the group has  organized symposia about pesticide resistance management, produced over 20 educational videos (http://ag.arizona.edu/crops/vegetables /videos.html), revised and expanded training programs, delivered updates to farmers via web, email, and smart phone  (http://ag.arizona.edu/crops/vegetables/advisories/advisories.html), organized online databases, and distributed newsletters.

This project was supported by the Multistate Research Fund (MRF) established in 1998 by the Agricultural Research, Extension, and  education Reform Act (an amendment to the Hatch Act of 1888) to encourage and enhance multistate, multidisciplinary research on critical  issues that have a national or regional priority. For more information, visit https://www.waaesd.org/.