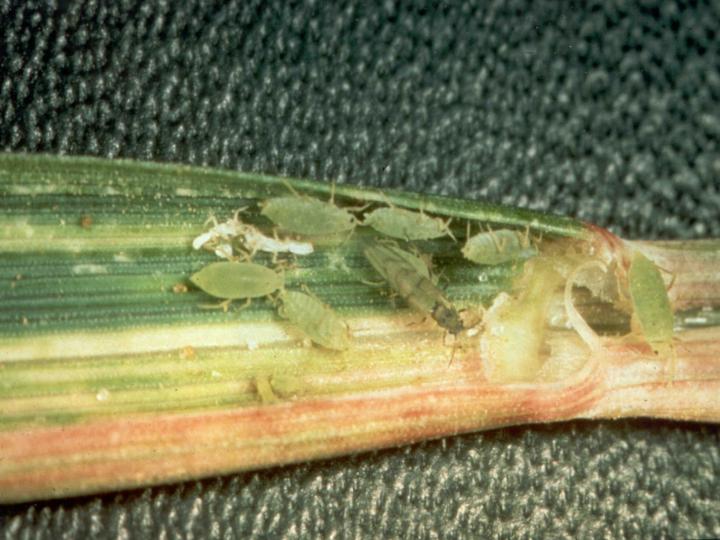 WERA-066 (2006-2011):This project developed new or enhanced tools and techniques for managing arthropod pests that damage cereal crop, helping  farmers and cereal breeders confront the challenges presented by evolution within pest species and by the establishment of new pest  species.

Insect pests, including Russian wheat aphid, greenbug, and Hessian fly, are serious  pests of cereal crops in the U.S. Since its introduction into Texas in 1986, Russian  wheat aphid (RWA) has spread throughout the western Great Plains cereal  production area, the Pacific Northwest, and the desert Southwest. Since 1986, the  total economic damage in the U.S. caused by RWA has exceeded $1 billion,  considering crop loss, cost of pest control, and lost revenue to rural economies. Severe economic damage from greenbug and Hessian fly (HF) occurs throughout the West, and several other arthropods can also seriously impact wheat, barley, and oat  production in the region. A primary goal of this group is to share the research needed to comprehensively manage these pests in small grain cropping systems in the West and to shorten the time from initial research activity to adoption by the end user.

WERA-066 has focused on characterizing differences  among RWA biotypes and has  developed a naming protocol  that has been widely adopted  beyond the committee.  WERA-066 has facilitated coordination among cereal  breeders who have developed  wheat and barley varieties that are resistant to RWA. Even  though some RWA biotypes  have the ability to overcome  resistance, resistant crop  varieties have been widely planted. For example, in Colorado, more than 50 percent of all acres are planted with resistant cereal lines.  Resistant cereal lines are being researched for HF, wheat stem sawfly, and wheat midge. Understanding the nature of damage caused by  various biotypes of RWA, HF, and other cereal arthropod pests is a key factor in developing resistance in cereal varieties that is not rapidly  overcome by the pests. Ongoing studies have yielded important results regarding gene expression in wheat when fed upon by different  biotypes of RWA and HF. Molecular and population genetics studies of several pest species have shed new light on the formation of  biotypes. In 2010, several WERA-066 members joined a USDA-National Institute of Food and Agriculture Risk Avoidance and Mitigation  Program (RAMP) grant. The WERA-066 members have helped the RAMP project meet their goals, including pest, disease, and weed surveillance; surveys of regional IPM practices in wheat; and the development of a website (iWheat) designed to provide real-time regional  pest, disease, and weed survey and management information. This has greatly enhanced the ability of WERA-066 members to engage with  the wheat industry.

New pest management systems are far from ideal, and new  challenges continue to develop through evolution within species and establishment of new species. To develop more effective  management systems, scientists must coordinate additional research on host plant resistance and susceptibility and farming practices. In addition, continued research on the genetics and  ecology of pests and their natural enemies is needed to develop  control tactics that are effective and sustainable in a wide  variety of agricultural settings.

This project was supported by the Multistate Research Fund (MRF) established in 1998 by the Agricultural Research, Extension, and  Education Reform Act (an amendment to the Hatch Act of 1888) to encourage and enhance multistate, multidisciplinary research on  critical issues that have a national or regional priority. For more information, visit http://www. waaesd.org/.